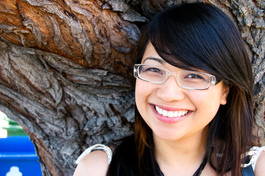 I started taking acting classes because I came to the conclusion that there just isn’t enough time in one’s life to do everything that I want to do, and that’s what I love about acting being able to experience more than just one life and changing the way that people think at the same time. I also think that acting, when done rightly, makes people more compassionate because you are forced to see things from someone else’s shoes.

Anyway, enough about acting, some of my real life experiences include:

I want to be fearless. I have a list of things that I want to do during my lifetime, some of them i’ve done: cage dancing, mechanical bull riding, learning to play the guitar, learning martial arts, composing songs, crowd surfed (at an INCUBUS concert!), booked a part on a prime time TV show… Some of them I still have yet to do: hang-gliding, swim with dolphins, do a fight scene on wires, learn how to snowboard REALLY well, learn to breakdance, produce my own films, make out (or more) on top of a car in warm rain, work for UNICEF or the Peace Corps and get all gritty, drive the Autobahn, my list could go on and on… I am a self -proclaimed dork. I do crazy stupid things and make a fool out of myself without ever wanting too…it just happens. But other than that, I’m pretty cool to be around. A little hyper sometimes, but easy going. People say they value the truth, but in reality people would like to believe that what they love is true. I’m kind of on a big honesty junkie phase right now. Everyday, God keeps showing me parts of myself that I am BSing myself on and my little blind spots here and there. And I’m telling you, it’s a rough process. I want to be real. And to do that I have to be real with myself.

I’m finally getting to the point where I actually like who I am and am okay with the complexities and paradoxes that lie within me…That I’m so passive and am the peacemaker in my family, but have the potential to be very violent. That I’m a little experimental nympho but am not okay with fucking around. That I can be completely clueless and dorky on so many things (like dating or the male species in general), but yet have wisdom on what makes good realtionships. That I love listening to both Micheal Card and Marilyn Manson. That I can be bouncing off the walls ecstatic/hyper, and still fall into super deep depressions that exhaust me to the point of comatose. To be strong and yet really weak. To be real. To not pretend to be something I’m not and yet not fall into the trap of being pigeon-holed on what people think of me either. I want to know why I believe the things that I believe. I want to know what I stand for and know that the foundation underneath me is unshakable.

I want to live each day without regret, knowing that I did my best and did what I could to make my little corner of the world a little bit better than it was before.

“…a standout in the supporting cast…[Giovannie Espiritu] has that innate gifted actor’s sense of reality that doesn’t draw attention to itself.”

While everyone is excellent in this movie, the standouts are Babette and her friend Bernice of the hilarious public access show that plays throughout the movie. By far the puppet scene here was the funniest in the whole movie and in general one of the funniest things I’ve witnessed in awhile. I’m talking quotable funny.

Giovannie’s work has a wonderful balance of spontaneity and technique. She herself is a generous spirit, open to direction, and just a joy to be around.

“Giovannie is an amazing talent and was able to animate her character and emote in ways beyond my direction to her. Often times I had to sit back in amazement at the performance she had given because it was above and beyond my expectations! The role Giovannie played in my film had her running around half the time in a heavy, dusty, hot, full-body monster costume and yet she was able to give her character so much life and personality. I couldn’t believe she was able to reach the audience through pounds and pounds of mop heads and fabric! But she did. On set, Giovannie is such a pleasant and warm spirit. Her positive attitude made her a joy to direct, especially considering what we put her through with that uncomfortable costume. I am unbelievably blessed to have had her in my film.”

“Giovannie is one of the most giving and prepared actresses I’ve worked with. Always focused on character, she brought a wealth of collaboration to my experience with her on American Yearbook. Her dedication to her craft actually brought the caliber of acting even higher on my set, as she set the bar for the other actors by her emotional commitment. I’m looking forward to casting her again… She’s the ‘it’ in ‘The Shit’ "

“Working on a tight deadline, rushing around getting everything in order and ultimately it was Gio that made it all work. Her ability to stay focused on the project, no matter what changes were thrown at her – combined with the way she kept the spirits of the cast and crew up and ready to go, made her an essential part of the process. A joy to work with and I can’t wait to do it again.”

“Giovannie completely blew me away! There were several moments I actually found myself watching the monitor and forgetting that I was directing a film; I had to remind myself to say CUT. Giovannie came to the set completely prepared. With little direction on my part, she instinctively knew how the emotions should play out with each and every scene. By the end of day one, Giovannie had given several emotionally wrenching performances, one after another…what Giovannie does is not easy at all. She simply makes it look easy with her constant professionalism and her unflappable attention to detail. Real talent is a very rare and magical thing; I can assure you, now, from my own experience, that catching lightning in a bottle truly is possible… it’s name is Giovannie Espiritu. “.”

“PHENOMENAL. No, REALLY PHENOMENAL. Giovannie is so present and committed. She brings a vulnerability to each scene that is fascinating to watch.”

“You did great, so great. Really. That must have been torturous for you, so thank you.”